2020 Bowman Chrome has been out for a few weeks and I think its a good time to check where prices are. Overall the cost of some of these cards are not too bad but there are some players priced way too high. Please remember I am only looking at the base auto price via completed eBay auction sales. My initial review of the checklist is located here. Thanks for reading.

Kendall Simmons - Philadelphia Phillies SS - $10 - I love the price here. But a risk due to contact issues.

Raimfer Salinas - New York Yankees OF - $20 - Has battled injuries so do not go crazy here.

2020 Bowman Chrome is set for release and the checklist is out for review.  I have reviewed each prospect on the checklist and my comments are below. Please take a look, provide comments and spread the word about PFC! Overall this checklist was not the best. A number of players are too old or just did not have the upside. There are a few players that I do like that have potential. Links to Ebay have been provided.

Antonio Cabello - New York Yankees OF - Lot of room for development here. I plan to keep and eye on him. Watch and revisit.

Andrew Dalquist - Chicago White Sox P - Young but has not played at all yet. Watch and revisit.

Alex Speas - Texas Rangers P - Good numbers but a pass for me.

Austin Shenton - Seattle Mariners 3B - Not a bad player but too old for me. Pass.

Bayorn Lora - Texas Rangers OF - 17 years old. Wait and revisit. Has not played yet.

Drew Millas - Oakland Athletics C - Pass. 22 years old and has not played yet.

Francisco Alvarez - New York Mets C - Nice player. A buy for me but will be a long term hold.

Gilberto Jimenez - Boston Red Sox OF - Young player. A project that I will watch and revisit. The talent is there.

Kendall Simmons - Philadelphia Phillies SS - Wait and revisit. Strikeout rates are alarming but he is talented.

Luisangel Acuña - Texas Rangers 2B/SS - Wait and revisit. A young player with some pop but I need to see him play past rookie ball.

Luis Matos - San Francisco Giants OF - Buy. I wonder what the price will be.

Logan O'Hoppe - Philadelphia Phillies - Pass for me. Not enough upside in my opinion.

Michael Harris - Atlanta Braves OF - Wait and revisit for me but I would understand if you bought. A ton to love here.

Oswald Peraza - New York Yankees SS - Buy. I like the potential here. Do you?

Packy Naughton - Cincinnati Reds P - Cool name but a pass for me.

Vaughn Grissom - Atlanta Braves SS - Wait and revisit for me. Not sure how much upside is here.

Wilderd Patino - Arizona Diamondbacks OF - I like the tools here. Buy.

Yoendrys Gomez - New York Yankees P - Wait and revisit. Not sure if he is a starter or will be in the bullpen.

An Update on How to Reach Me

Please note the new email address. If you have any questions feel free to comment on a post or email me at askpfcnow@gmail.com. I also will continue to be on Twitter @Prospects4Cash. Thanks again for your support.
by J360 No comments:

Philadelphia Phillies 3B Alec Bohm - So Far, So Good

Alec Bohm is off to a great start in the majors. Even though the sample size is small he is showing great plate discipline and power potential. The main thing to note is that historically 3B prospects tend to be safe bets. Yes there is always a chance for a prospect to wash out but the evaluation for most 3B prospects is easier because the bat is a bigger component of the scouting report. 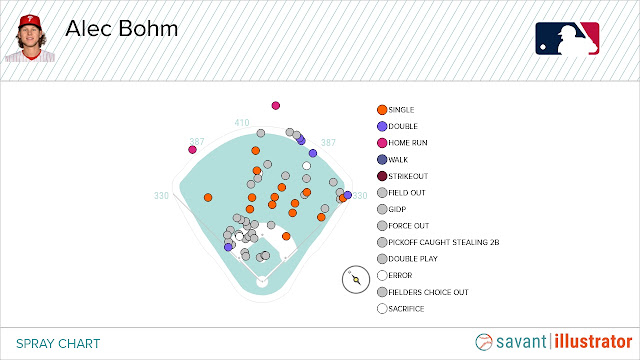