A Few Notes on Ke'Bryan Hayes ( Pittsburgh Pirates, 3B)

There were a number of prospects called up during the 60 game season but I wanted to take a moment to talk about Ke'Bryan Hayes. I have always liked him as a prospect but the one thing that was always a concern for me is if he could hit for power. Although I am looking at a small sample size (95 PA), it seems the power is coming. One factor that I may have missed is the ball is flying out of MLB ballparks these days. What is promising is that he is already a solid hitter and defender. I think there will be growing pains but I expect his performance to be sustainable as he is already a hitter who makes good contact. He has never had a K% over 20% during his entire minor league career. 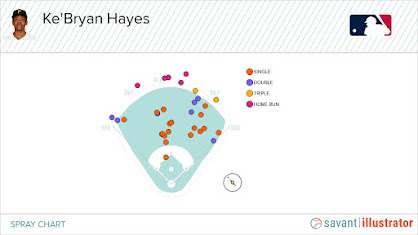